For January’s #MovieMonday, we’re going down under with Taika Waititi’s 2010 film “Boy”.

The year? 1984. Here we meet Boy, an 11-year-old who lives on a farm with his Gran, a goat, and his younger brother Rocky (who thinks he has magic powers). Shortly after Gran leaves for a week, Boy’s father, Alamein, appears out of the blue. Having imagined a heroic version of his father during his absence, Boy comes face-to-face with the real version – an incompetent hoodlum who has returned to find a bag of money he buried years before. This is where the goat enters. Don’t miss this incredible film from the talented Taika Waititi. Watch the trailer below.

Admission is by donation, and popcorn will be provided. Don’t forget to bring your refillable water bottle, or purchase your very own from Six Nations Tourism.

Movie Summary
“Set on the east coast of New Zealand in 1984, Boy, an 11-year-old child and devout Michael Jackson fan, gets a chance to know his absentee criminal father, who has returned to find a bag of money he buried years ago.” 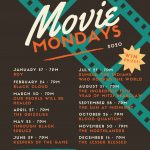